Portfolios > Broken Glass
“Through Broken Glass” is a group of photographs taken at The
Brooklyn Navy Yard during a three-month period in 2009. They document one building that was being demolished at that time to make way for the private development of the Yard. As more and more of the structure disappeared, there was a feeling of desolation and abandonment. Sun poured through the vast gaps where the roof had once been. Broken glass was everywhere. Fragments remained in the windows frames making jagged designs or becoming visual passageways to the interior. Steel beams, broken stairs, light fixtures, pieces of machinery, and pipes could still be seen in the interior, but the sounds of the machinery and the voices of the people who had worked there were stilled. Yet through the broken glass, traces of the Brooklyn Navy Yard’s history remained. These photographs tried to capture a piece of this past before it disappeared forever. 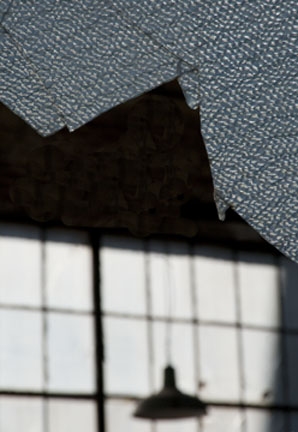